There are hundreds of different versions of Monopoly that you can buy. We’ve all seen Star Wars and Disney Monopoly on the shelves, but this post is about an edition that you might not have heard of and certainly won’t have seen in the shops – Gay Monopoly. 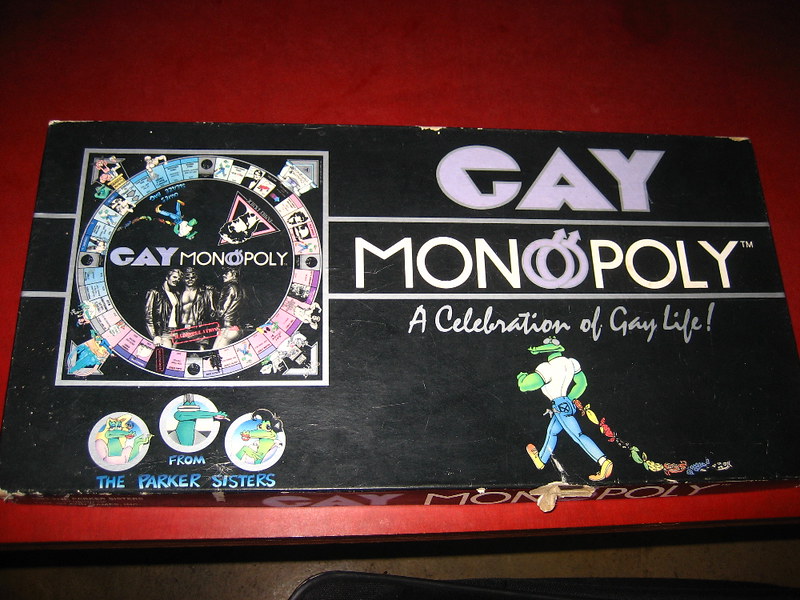 Gay Monopoly is one of the rarest versions of Monopoly, ever! It puts a whole new spin on the classic property trading game.

What is Gay Monopoly?

Gay Monopoly is an unofficial version of the game that was originally released in 1983. It was released by a division of Fire Island Games called Parker Sisters (the Monopoly brand was owned by Parker Brothers).

Unfortunately, Parker Brothers didn’t see the funny side, and the creators of Gay Monopoly were sued for copyright infringement!

This means that very few copies of the game were ever made. So Gay Monopoly became a super-rare (and therefore expensive) find for fans of both Monopoly and queer culture.

You can see from the off that this is a very different version of Monopoly. The game board features original artwork of men in leather jackets and denim jeans and the tagline ‘A Celebration of Gay Life’.

Gone are the straight lines of the standard Monopoly board and instead we are taken on a circular journey where the properties represent famous gay landmarks. Some of the places that you can buy include Castro Street, Provincetown, Oscar Wilde’s Waterworks, Fire Island, Cedar Springs Road, and Bourbon Street.

Gay Monopoly comes with unique playing tokens and you can choose to play as either a jeep, teddy bear, blow drier, leather cap, handcuffs, or a stiletto heel. 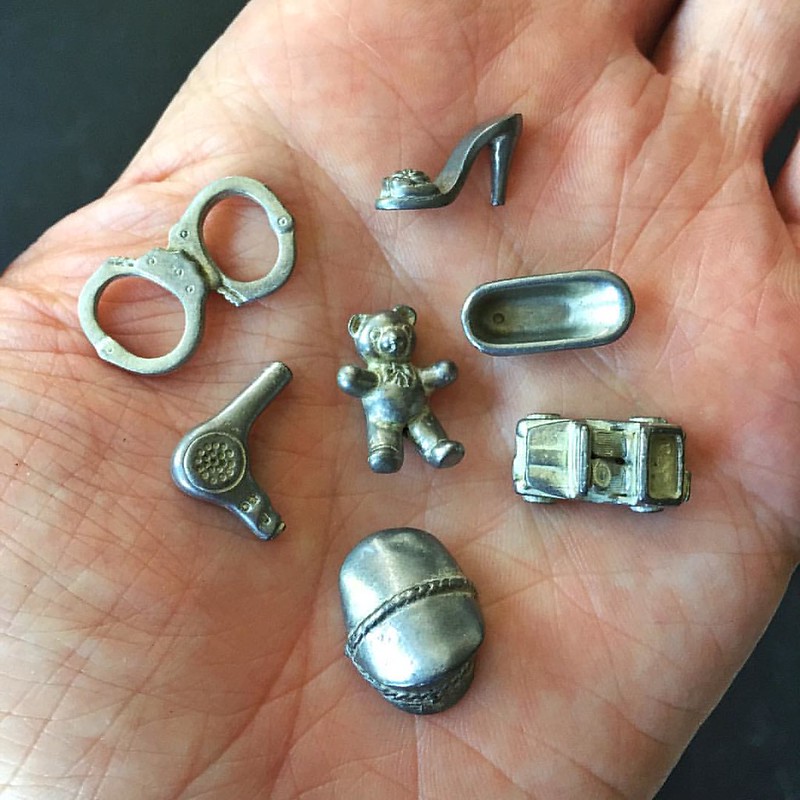 When it comes to a property, you’re no longer buying houses or hotels, in Gay Monopoly, you’re investing in bars and bathhouses.

There are some fun extra rules!

While much of the game follows the classic rules of Monopoly, there are a few additions that make this game stand out…

One of these is the inclusion of Family Pride cards. If you land on the space for these you can pick up a card that has the description of a gay man on it. The player has to read it out loud whilst the others have to try and guess who it is. If you get it right you can move ahead to any space on the board.

The game also includes Camp Cards that make you perform a certain action. For example, one of the cards asks you to say ‘faaabulous’ in six different ways to receive $3.

Another new addition is Hanky Code Cards. These ask the player to recall what each color of hanky meant, and what it meant when worn in a different rear pants pocket.

Remember, this game was made in the 80s, so it offers a look into the past, rather than being representative of gay culture today.

Where To Buy Gay Monopoly

It’s very hard to get your hands on a copy of Gay Monopoly. Only a few copies of the game were ever made, and those that were sold were originally brought out nearly 40 years ago.

The chances of finding a complete set these days are fairly low, and if you do manage to locate a set, it won’t come cheap. If you ever do spot a cheap Gay Monopoly set at a garage sale or thrift store, you’ll want to snap that up fast!

Where there is a rarity there is value and there are a few people able to source and sell Gay Monopoly. Your best bet is to look on eBay, at the time of writing there are a few versions up for sale.

If you are looking for a complete set of Gay Monopoly it will likely set you back about $800. It’s a pretty hefty investment for a board game, so you might be tempted by an incomplete set with minor damage that can be snapped up for around $350.

Either way, it is quite pricey. But, you will have an unusual and unique game that is probably going to go up in value over the years. It is a highly original spin on Monopoly, so if you’re a big fan of the game it will definitely stand out within your collection.

Other Queer Culture Games To Consider

This is a fun card game that gives you a mixed deck of questions, answers, and dares. The Judge draws a question card and reads it aloud. The other players must look at their answer cards to try and answer the question in the most amusing way.

To make it more fun there are Dare prompts shuffled into the pack which prompts you to do things like ‘sing your favorite Gaga song’ or do an impression of another player.

This is another adult card game that is inspired by queer culture. This party game aims to bring you a little closer to your friends – the deck is filled with relatable references and inside jokes.

Cock & Tails is designed to be a drinking game, so it’s perfect for getting warmed up before you head out, or ideal for a fun night in. It’s best played by between three and ten players, but really there’s no maximum if you have lots of friends coming over.

This game is an interesting twist on the classic game of Battleship which I think everyone must have played as a child. This is definitely an adult version, but it’s simple to learn and doesn’t involve too much thinking to get started.

Love Battleship is a nicely made game that features beautiful watercolor illustrations of the activities. It’s specifically aimed at lesbian couples and the inclusion of foreplay cards and intimate activity cards is designed to get you in a romantic mood and build anticipation.

Gay Monopoly is such a rare game that you could think of it like an investment piece – games like this generally rise in value over the years. What that does mean though, is that you might not want to actually play it, as the condition of a game affects its value a lot.

If you’re just looking for a fun game to play with friends or your partner, then I suggest that you have a look at this list of The Best Monopoly Games for Adults.

Alternatively, if you already have a Monopoly set, then you could even Turn Monopoly into a Drinking Game with a few simple rule changes.