Winning a game of Monopoly is so much easier when you know the best tactics to use. One of the main tactics that will help you to win at Monopoly is to know which are the best properties to buy.

Some Monopoly properties are certainly better than others. This article will show you which are the best Monopoly color sets to buy and why so that you can beat your friends at Monopoly much more often.

Note: This guide is for the United States. If you’re in the UK, then check out the UK version of this guide.

The best properties in Monopoly

The best properties to buy in Monopoly are the Oranges (New York Avenue, Tennessee Avenue, and St. James Place). The Orange properties are landed on most often as they are positioned 6, 8, and 9 squares after the popular Jail space. They also have one of the best ROIs of all color sets.

What makes some Monopoly properties better than others?

There are five things that we must consider when working out which are the best Monopoly properties. These are:

I’ve done the math to work out all of these things to create a list of the best Monopoly properties in order from best to worst.

1. The most commonly landed on Monopoly spaces

First, let’s look at which Monopoly properties are landed on the most.

The layout of the Monopoly board is not even, so some properties are more likely to be landed on than others. If you can build houses and hotels on the spaces which are landed on a lot, you’ll likely earn more money from rent.

Landing on Chance and Community Chest spaces can transport people to certain locations on the board, as can landing on the Go To Jail space. When you combine this with the fact that you are more likely to roll certain numbers on the dice (e.g. 7) than others (e.g. 2 or 12), then we can work out which spaces will be landed on most over time.

Which Monopoly properties are landed on the most?

Based on probability, the single most landed on property on a classic Monopoly board is Illinois Avenue (Red). This space has a 3.19% chance of being landed on in any given turn. The average for all spaces is 2.86%.

This data comes from a computer simulation of 32 billion rolls which takes into account all of the rules, including being sent to a space because of a Chance Card, Community Chest card or some other reason.

This table shows the probability of landing on each space, per roll:

This data assumes that players take the strategy of always paying to get out of jail. If players tried to stay in jail as long as possible, some of the probabilities would change slightly.

Which Monopoly color set is landed on most often?

The Monopoly color set that is landed on most often is the Orange set (New York Avenue, Tennessee Avenue, and St. James Place). The three Orange properties are all in the top five most landed on properties (not including spaces like Railroads, Go, and Free Parking).

The most common space to land on is Jail and the Orange properties are ideally positioned to be landed on upon leaving Jail.

This table shows the probability of landing on each color, per roll:

This data comes from adding together the probability of landing on each individual property in a color set.

The Dark Blue and Brown sets have a lower overall chance of being landed on because there are only two properties in each set, whereas all the other sets have three.

2. Monopoly properties that are easiest to get a full set

When considering which are the best properties in Monopoly, it’s important to remember that you must have a full color set to buy houses. Therefore, the sets that are easiest to complete have an advantage.

Which Monopoly color sets are easiest to get?

The easiest set to acquire in Monopoly is the Dark Blue set (Park Place and Boardwalk), followed by the Brown set (Mediterranean Avenue and Baltic Avenue). This is because there are only two properties in each of these sets whereas the other sets all have three properties.

Out of the color sets that require three properties, the easiest sets to complete are those that are easiest to land on. Orange is the easiest Monopoly set to complete, followed by Red, and then the Yellow properties.

The next thing to take into consideration when working out which are the best Monopoly properties to buy is the cost of buying houses. If you never have enough cash to buy houses, you’ll never make much money from your sets.

How much do houses cost in Monopoly?

We also need to think about how much you can charge for rent. It’s always disappointing when someone lands on your property and can easily afford to pay the rent.

When you build houses and hotels on your properties, you can demand more rent, as indicated on the Title Deed Card.

5. Monopoly properties with the biggest return on investment

Of course, having a full set isn’t that great if it doesn’t generate a good return on your investment. When it comes to ROI, some color sets have a better payoff than others.

To calculate the return on investment for a color set in Monopoly, we must consider the costs of buying the properties and building houses and hotels, as well as the income generated by rent when other players land on them.

Which Monopoly properties are cheapest to buy?

Monopoly properties go up in price as the distance after the Go space increases. Therefore, the cheapest properties are the first on the board – the Brown color set and then the Light Blue color set. This edge of the board also has the cheapest houses at just $50 each to buy.

Which Monopoly set has the biggest payout?

Which Monopoly sets have the best return on investment (ROI)?

When considering the ROI of each Monopoly set, it can be useful to consider the return from landing on the properties when they are undeveloped, as well as with houses and hotels.

When no houses are added, the most expensive properties have the highest return on investment and the cheapest ones have the lowest. It’s pretty straightforward.

The following table shows the ROI for Monopoly properties with no houses or hotels:

Without any houses or hotels, the ROI of all properties is low and you are unlikely to make a profit from any undeveloped properties, even in a long game.

The property with the highest ROI when undeveloped is Boardwalk, which has an ROI of 12.5%. You would need another player to land on Boardwalk eight times to make your money back.

The property with the lowest ROI when undeveloped is Mediterranean Avenue, which has an ROI of just 3.3%. You would need another player to land on it 30 times to make your money back.

Having three houses on a set is seen as the ‘holy grail’ in Monopoly because three houses generate a decent ROI. For the Green and Dark Blue color sets, the ROI from three houses is actually greater than from hotels!

Once you start adding houses, the ROI scale is no longer linear from the cheapest to most expensive properties. This is because the properties with the highest rents also have high building costs.

The following table shows the ROI for Monopoly color sets with three houses:

The ROI is calculated with the following equation:

With three houses, the Monopoly color set with the best ROI is the Dark Blue set (Park Place and Boardwalk), followed by the Orange set (St. James Place, Tennessee Avenue, and New York Avenue) and then the Yellow set (Atlantic Avenue, Ventnor Avenue, and Marvin Gardens).

You may notice that all the best sets are the second color on each edge of the board.

The return on investment of properties with hotels is another important ROI metric to consider.

Buying hotels on the Dark Blue set may often be a waste of money. However, on cheaper properties like the Brown and Light Blue color sets, it’s usually a good idea if you can afford it.

The following table shows the ROI for Monopoly color sets with hotels:

The ROI is calculated with the following equation:

When hotels are added, the Monopoly color set with the worst ROI is the Green set (Pacific Avenue, North Carolina Avenue, and Pennsylvania Avenue).

The best properties to own in Monopoly

To work out what are the best properties to own in Monopoly, the two most important things to consider are:

I multiplied these two elements together to get an average ROI% for each property with three houses, per roll of the dice.

This table shows which are the best properties to buy in Monopoly:

The best color sets to own in Monopoly

If we take an average of the ROI (with three houses) of each property in a color set, we can rank the Monopoly color sets in order from best to worst.

This table shows which are the best color sets to buy in Monopoly:

What’s the least landed on property in Monopoly?

Are utilities good in Monopoly?

The Monopoly utilities aren’t a good purchase as the chance of landing on them is relatively low and your opponents will need to land on them at least five times before you make a return on your investment.

Read more about the Monopoly utilities. 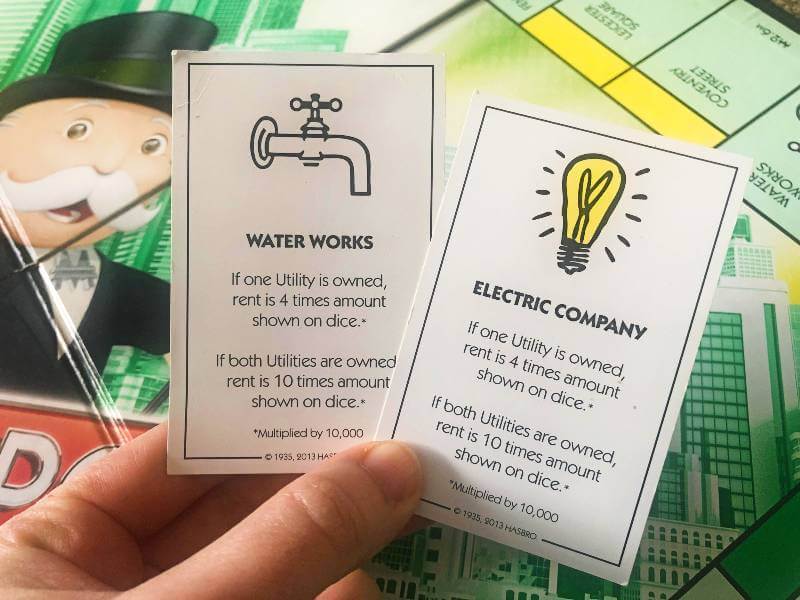 What’s the most expensive Monopoly property

The most expensive Monopoly property is Boardwalk. It costs $400 to buy. Once you add a hotel you can charge a maximum rent of $2000 to anyone who lands on it.

Are the Dark Blues good in Monopoly?

In Monopoly, The Dark Blues are one of the best color sets to buy, although they’re not as good as the Oranges. While you can charge the highest rents with the Dark Blues, their position on the board means that they won’t be landed on as often as some other colors.

Is Red better than Yellow in Monopoly?

In Monopoly, the Reds and Yellows are both decent color sets to buy, but the Red set is slightly better overall. Although the Yellow properties can command slightly higher rents, the Reds are more likely to be landed on.

These detailed calculations have shown us that the Orange color set is the best color to own in Monopoly. Of course, that doesn’t mean that you should go for this color at all costs! It’s perfectly possible to win a game of Monopoly with any color set, particularly if you’re good at negotiating trades and are lucky with your rolls of the dice.

Jenni Fielding is the founder of Monopoly Land - an unofficial fan site. She has been a huge fan of Monopoly and has been playing the game for over 30 years. She is a stickler for the rules and loves to find vintage Monopoly sets in second-hand shops.